As discussed several times previously on this blog, there is a common perception that energy prices always go up.  We have examined both natural gas prices (read here and  here) and electricity prices (read here).

In this post, we look again at electricity prices—specifically, how they behaved in PJM last year.

PJM zonal day-ahead load weighted average Locational Marginal Prices (LMPs) averaged $50.92 per megawatt-hour (MWh) during 2010 and $45.19 during 2011, an 11.3% decline.  During 2012, this weighted average price dropped to $34.55 per MWh, a further 33.6% decline.  This is a stunning decrease and was driven primarily by the decline in natural gas prices.  Electricity and natural gas prices are strongly correlated in PJM as natural gas-fired generating units are generally the marginal units called upon in PJM’s least cost dispatch model.

LMPs vary significantly by zone, as shown on the graph below. 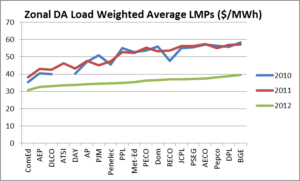 The change in average LMPs between 2011 and 2012 varied by zone but, in all cases, was lower during 2012.  The decline ranged from 19.4% in the Commonwealth Edison zone to 35% in the Atlantic City Electric zone.  A sampling of zonal price changes is presented in the table below. 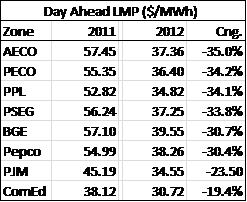 The overall decline can also be seen in the further contraction of prices into the lower end of the frequency distribution shown below. 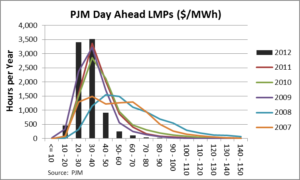 From January 2007 to December 2012, Day Ahead LMPs in PJM averaged $46.57 per MWh.  This corresponds to the period during which PJM has in place its capacity market model, referred to as its Reliability Pricing model (RPM).  Current LMPs are well below this average, as shown in the graph below. 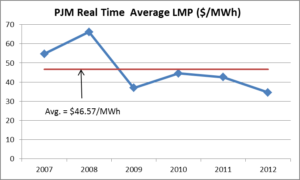 The LMPs plotted above are in nominal dollars and do not take into account inflation.  The effect of inflation can be illustrated by increasing the right side of the red line relative to the left side.  In other words, in real dollars, the decline in electricity prices in PJM is more dramatic than shown.

Do energy prices always go up?  The answer remains “no” as it relates to electricity and natural gas prices.