Markets adjust.  There are perhaps few better examples of that adage than the crude oil and natural gas markets.  One way of looking at how these two markets adjust is through the rotary rig count.  Baker Hughes keeps track of the number of active drilling rigs in the US (and also internationally). 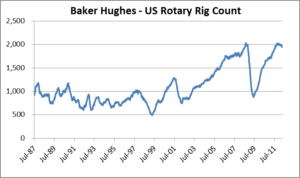 The September 2008 rig count peak occurred three months after crude oil and natural gas monthly average prices peaked at $133.88/barrel and $10.28/mcf, respectively.  The rig count then followed the subsequent collapse of energy prices.  Crude oil fell to $39.09/barrel by February 2009 and soon thereafter, the rig count bottomed at 876 rigs in June 2009.  Since this bottoming in the rig count, the count has risen dramatically over the past three years to the current level of 1,945 active rigs.  The following graphs present historical monthly average crude oil and natural gas prices.

Baker Hughes also classifies operating drilling rigs by their primary target – oil or natural gas.  The rig count broken out by these two targets is depicted on the graph below. 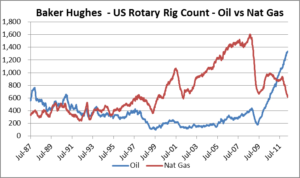 The graph below shows the active US crude oil and natural gas rig count on a percentage basis. 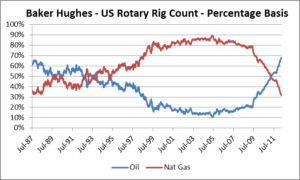 The change in focus from drilling for natural gas to drilling for crude oil has been a longer term trend, going back to the summer of 2005.  Seven years ago, about one in ten rigs were focused on crude oil.  Today, for more than two-thirds of the rigs, crude oil is the primary target.

So far we have looked at data back to 1987.  During this period, today’s count of 1,945 active rigs is close to the 2,031 maximum.  Looking back further in time, how does this compare? 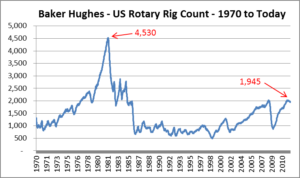 Today’s total rig count is less than half the 4,530 rigs that were operating during late 1981.  Advances in drilling exploration techniques such as 3-D seismic, horizontal drilling and centralized drilling pads have increased success rates in exploratory drilling and increased drilling rig productivity.