We have noted previously on this blog that natural gas prices have declined dramatically over the last three years. On January 19, 2012 the February futures contract settled at $2.32 per million Btus. This is lower than natural gas prices have been in a decade and we are in the winter heating season, a time when prices generally rise. Adjusted for inflation, prices have not been this low since late 1998.

Looking ahead, the graph below shows the evolution of the twenty-four month natural gas futures curve over the last year and a half. It may seem counterintuitive, but as the futures curve has dropped it has remained upward sloping. In other words, as natural gas prices have declined, the market has continued to expect prices to rise in the future. 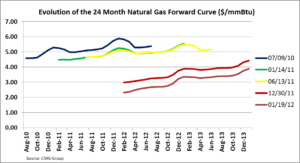 Influences that will continue to moderate natural gas prices:

– Further development of shale gas reserves, particularly the Utica Shale in the Appalachian Basin
– Drilling to hold onto mineral leases

This list is certainly not comprehensive but should serve as a good starting point. We will discuss these influences in this and future blog posts. 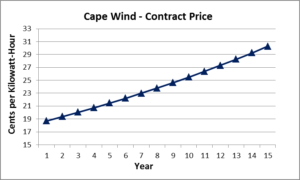 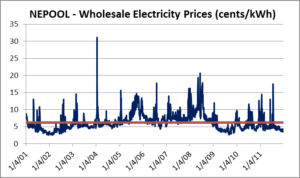 We have looked at historical and forward natural gas prices. How have electricity prices been behaving? 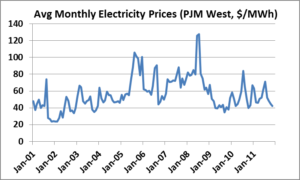 The graph above shows the monthly average of electricity prices at PJM West (a trading hub where electric generation is concentrated) spanning the 131 month period of time of January 2001 through November 2011. Like natural gas, electricity prices peaked during 2008, declined, recovered somewhat, and then declined again. The relationship between electricity prices and natural gas prices can be seen better in the graph below: 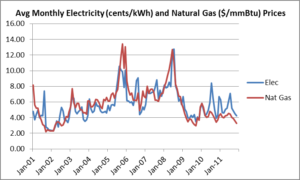 While electricity price and natural gas prices tend to move together, the relationship between the two does change over time. 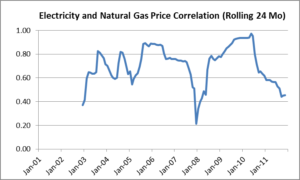 In the above graphs, you can see how over the last two years, electricity prices have recovered more strongly than natural gas prices, leading to declining correlations between the two. 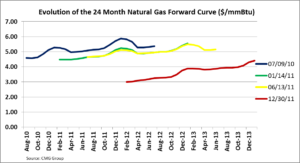 The above graph shows the monthly “forward curve” for natural gas at four different points in time. The forward curve represents the collective thinking of many, many market participants, both hedgers and speculators, who put real money on the line. While we know with a high degree of probability that actual natural gas prices will differ from those predicted by the forward curve, the forward curve is the best indicator of future prices that we have. Of course, the forward curve changes on a minute by minute basis as market sentiment changes.

The lines on the graph represent the market’s expectations for the price of natural gas for each of the following 24 months as of points in time during July 2010 (blue line), January 2011 (green line), June 2011 (yellow line) and, most recently, December 2011 (red line). Prices are expressed in dollars per million BTUs ($/mmBtu). These four points in time span approximately 18 months.

What do these curves tell us? Two observations stand out.

First, in each case, the curves are upward sloping, meaning that as of each of the four points in time, the market has expected natural gas prices to rise in the future. This is known as contango.

Second, over time, the forward curves have shifted downwards.

In fact, if we take the average price of each forward curve, over the 18 month period, as shown in the table above, the curves have declined by 30%, from $5.20/mmBtu to $3.64 mmBtu. This is a dramatic drop.

What does the forward market say about natural gas prices beyond 24 months? 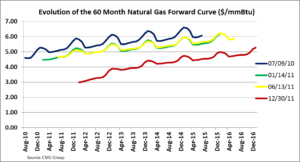 The above graphs shows the same four forward curves as above, but extended out to 60 months. The curves continue to be upward sloping, indicating that the market expects natural gas prices to rise.

The most recent forward curve indicates that the market continues to expect natural gas prices to rise, specifically from $2.99 per mmBtu to $5.28/mmBtu over five years.

The Avalon Advantage – Visit our website at www.avalonenergy.us, call us at 888-484-8096, or email us at jmcdonnell@avalonenergy.us