On December 16, 2011, we looked at the relationship between natural gas and crude oil prices (see “Crude Oil and Natural Gas Get a Divorce” here).  We looked at how historically, on an energy equivalent basis ($/mmBtu), crude oil (West Texas Intermediate at Cushing, Oklahoma) traded at about a 50% premium to natural gas at the Henry Hub in Louisiana, reflecting crude oil’s greater energy density, portability, and flexibility.  We also looked at how, more recently, natural gas and crude oil prices had become decoupled and how the ratio of the price of crude oil to the price of natural gas had moved from the 1.5x historical multiple to, in December 2011, the astounding level of 4.9x.

What is the relationship now? 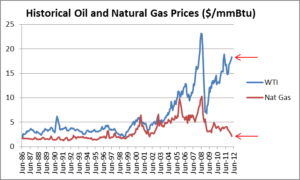 This continued divergence in price movement drove the energy equivalent crude oil/natural gas price ratio from 4.9x to 8.5x at the end of March, as shown on the graph below. 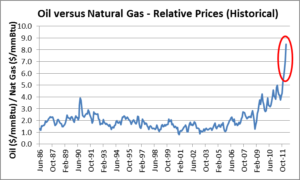 Where does the relationship appear to be headed in the future? 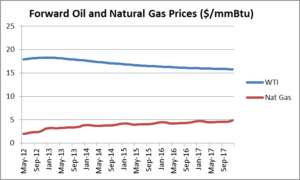 The May contract prices for WTI crude oil and natural gas at $17.93/mmBtu ($103.64/Bbl) and $1.98/mmBtu, respectively, mean that crude oil is trading at NINE TIMES the price of natural gas on an energy equivalent basis.  From a historical multiple of 1.5x to 9.0x now, crude oil and natural gas not only got a divorce, they moved to different hemispheres.  Expectations are that this ratio will decline, but only to 3.2x by December 2017. 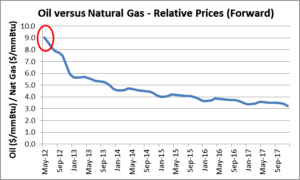 The graphs below show the (i) historical and forward price and (ii) relative relationship data on individual graphs:

Avalon Energy Services recently completed an electricity procurement process for five properties in Washington, DC owned by Clarion Partners, LLC. Under the new supply contracts, the five buildings will pay 27% less, in aggregate, than what they currently pay under existing contracts.  Avalon Energy Services’ press release related to this was picked up by a number of news organizations.  Read the full press release, as reported by NASDAQ OMX GlobeNewswire here.

March is the last month of the five month winter heating season.  As of March 30, the level of US working gas in storage was 2,479 BCF.  This is an increase during a time of the year when natural gas is historically withdrawn from storage, not injected.  The March 30 level is 927 BCF, or 59.7% greater than the average March working gas level of 1,552 BCF recorded over the previous five years.  The graph below shows the minimum, average and maximum levels of working gas in storage over the years 2007 through 2011 as well as the levels recorded so far during this year, 2012. 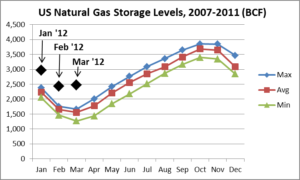 The graphs below show the January, February and March working gas storage levels compared to the average level over the period 2007 through 2011.

As seen in the table below, the volume of natural gas in storage continues to increase compared to the historical average.

Yesterday, the May natural gas futures contract settled at $2.09 per Dekatherm.

As discussed on this blog, there is a common perception that energy prices have been, and continue to be, on a one way path upwards.  In previous posts we focused on natural gas and showed that rather than rising, natural gas prices have, in fact, fallen dramatically, over both the short run and the long run (see here and here).

First some background.  PJM is the independent electric grid operator in the Mid-Atlantic and parts of the Mid-West and is responsible for the reliability of the electric transmission system and, equally importantly, managing the market for wholesale electricity and related services throughout its operating territory (as well as into and out of PJM).  Below is a map of the territory PJM covers. 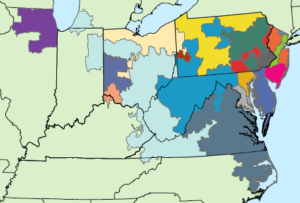 PJM has many pricing points individually referred to as locational marginal prices (LMPs).  LMP is the pricing mechanism for wholesale power in PJM.  LMPs vary by location when transmission congestion exists.  LMPs can be nodal or zonal.  Nodes refer to specific buses.  Zonal LMPs correspond to PJM transmission zones.  Energy prices are established in both the day-ahead and real-time markets.  When referring to LMPs over time, they are often presented as “average prices” or as “load weighted average prices.”  The later accounts for the amount of load at a node or in a zone during each hour over the total measurement period.  All in, PJM keeps track of over 10,000 LMPs.

So, back to the story.  During 2010, PJM zonal day-ahead load weighted average locational marginal prices averaged $50.92 per megawatt-hour (MWh).  This weighted average price dropped to $48.69 per MWh during 2011, a 4.4% decline.  LMPs vary significantly by zone, as shown on the graph below. 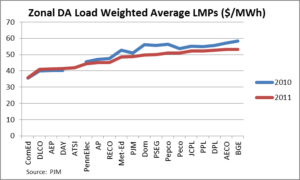 The change in average LMPs between 2010 and 2011 varied considerably by zone.  LMPs dropped about 10% in the PSEG and Pepco zones.  There were some exceptions to the overall decline in LMPs, such as in the AEP zone, in which the average LMP increased.  A sampling of zonal price changes is presented in the table below.

This overall decline can also be seen in the contraction of prices into the lower end of the frequency distribution shown below. 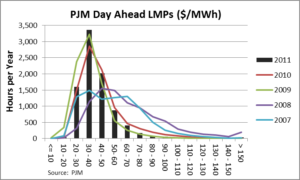 From January 2001 to the present, LMPs in PJM have averaged $55.81 per MWh.  Current LMP prices are well below this average, as shown on the graph below (in red). 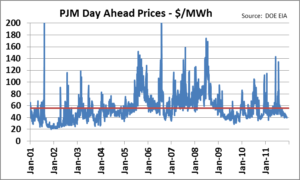 Do energy prices always go up?  The answer is “no” as it relates to electricity and natural gas prices.