This article looks at how cold weather led to great volatility in real-time wholesale electricity prices during January 2014 in the PJM Interconnection (PJM).

The month of January 2014 was the coldest in decades in the US as a Polar Vortex pushed its way into the Midwest, South, and East.

Winter electricity use in the Mid-Atlantic generally exhibits a daily bi-modal pattern, with morning and evening peaks.  The graphic below shows total PJM load during the 24 hours of January 22, 2014. 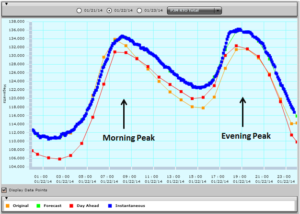 Because of the exceptionally cold weather on that day, during the morning and afternoon, real-time electricity prices were elevated, averaging about $350 per megawatt-hour.  During the evening peak-demand period, as a result of the shutdown of the Calvert Cliffs Nuclear Power Plant’s two units, prices rose even more substantially.  The two nuclear units, located on the western shore of the Chesapeake Bay in Calvert County, Maryland, together represent more than 1,700 megawatts of installed capacity.  The outage was described by the facility’s owner, Constellation Energy Nuclear Group (now part of Exelon Corp), as the result of an electrical malfunction on the non-nuclear side of the plant.  Regardless of the side of the plant on which the malfunction occurred, real-time prices in the transmission-constrained Potomac Electric Power Company (Pepco) and Baltimore Gas and Electric (BGE) Zones rose dramatically, for about a five hour period, reaching $1,890.70 per megawatt-hour in the Pepco Zone and $1,896.94 per megawatt-hour in the BGE Zone. 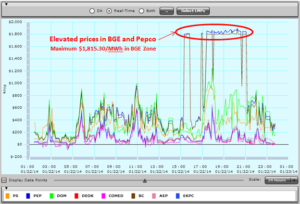 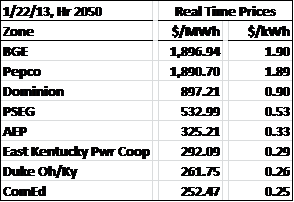 The grid operator, PJM, had been calling on demand response all day during January 22.  The average demand response price (Average DR Dispatch Lambda) rose to $835 per megawatt-hour at hour 1759 (5:59 PM) as shown below. 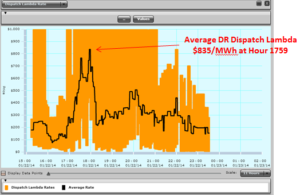 During January 23, 2014, as both the bitterly cold weather and the Calvert Cliffs outage continued, prices remained elevated, especially so in the constrained Pepco and BGE Zones.  The table below presents real-time prices in eight PJM zones at 2030 (8:30 PM). 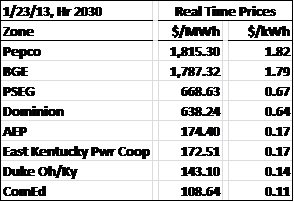 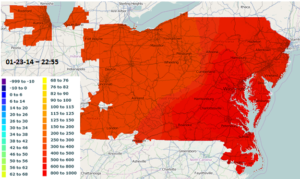 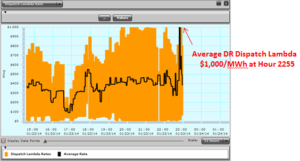 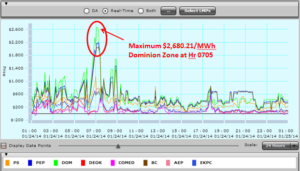 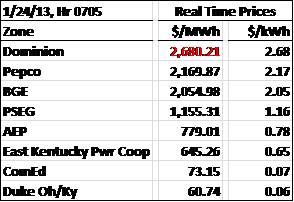 Less than two hours later, at 0850 (8:50 AM), due to a transmission constraint, a small portion of northern central West Virginia experienced negative prices while prices on the western side of PJM continued to exceed $200/MWh and on the eastern side exceeded $600/MWh. 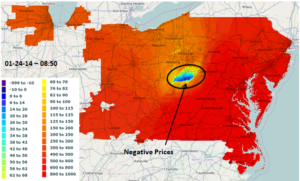 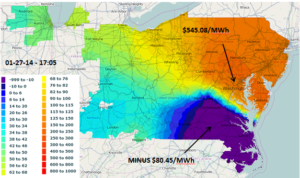 This volatility is shown on the graph and table below. 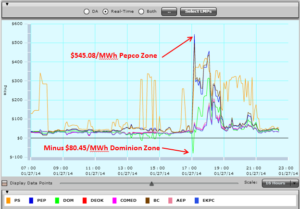 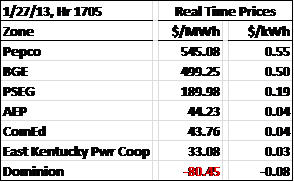 Volatility occurred not only in the real-time market but also in the day-ahead market.  On January 28, day-ahead prices averaged about $600/MWh as shown here… 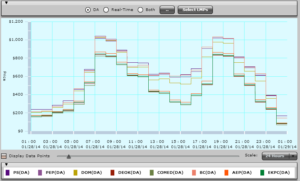 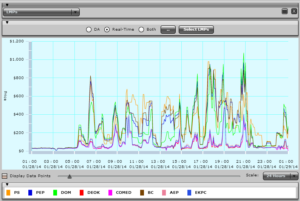 Putting This Into Perspective

For comparison, real-time wholesale prices in PJM averaged $31.21/MWh during 2012.  The peak high price of $2,680.21/MWh that occurred in the Dominion Zone on January 24, 2014 represents an 86-fold increase compared to the average.  This is not an 86% increase but a multiple of 86 increase.  This is the equivalent of walking into a convenience store to buy a gallon of milk and having the clerk tell you that yes, they do have milk, but because of current market conditions, they have to charge you $343 for a gallon.  Comparisons to other everyday items are presented below: 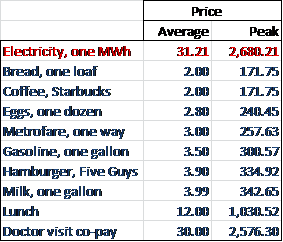 The low price of minus $80.45 per megawatt-hour that occurred during January 27, also in the Dominion Zone, represents a 2.6-fold decrease compared to the average.  This is the equivalent of walking into a Starbucks and having the barista inform you that they have coffee, in fact too much coffee, and they will pay you $5.16 to take a cup away.  Comparisons to other everyday items are presented below: 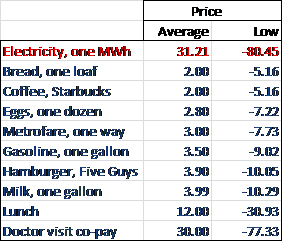 Wholesale electricity prices are volatile—more volatile than the price of virtually any other commodity.

It is likely that some retail energy providers will not survive this period of volatility.

For more on how electricity prices in the PJM Interconnection area can be affected by weather and other events, please see:

PJM is divided into twenty load zones.  These zones are color coded on the map below: 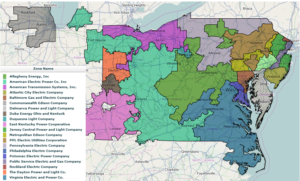